When casual racism permeates society, should we still celebrate Racial Harmony Day? How can we take the ideals of multiculturalism beyond just paying lip service?

It’s Racial Harmony Day today and school children across Singapore are dressing up in different cultural outfits and playing traditional games to mark the occasion.

But some have questioned the need for Singapore to have a day highlighting racial harmony.

Isn’t it slightly hypocritical, they ask, to celebrate the occasion when there is so much more work to be done?

Minorities in Singapore still have to deal with the casual racism that underpins some of our daily interactions, with more overt racist incidents happening last year, such as the polytechnic lecturer who told off an interracial couple on Orchard Road, or physical and verbal attacks on people of other races, both Singaporean and foreigner.

More recently, we had to deal with the ignominy an auntie accosting a Korean live-streamer in Singapore to warn her “not to get raped by Indians”. Yes, my mind is still boggled. That was wrong on so many levels.

A recent poll by CNA and the Institute of Policy Studies (IPS) said that more than half of Singaporeans believe that racism is an important problem to tackle, up from 46.3% in 2016.

And last year, Prime Minister Lee Hsien Loong announced that the Government intends to pass a new Maintenance of Racial Harmony Act, which will include “softer” measures and encourage moderation and tolerance between different racial groups.

So, what is there to celebrate if there is so little racial harmony in Singapore?

Perhaps breaking down the phrase “Racial Harmony Day” might help us find an answer.

Why not just a harmony day? By highlighting our disparate races and cultures, if we emphasise too much our differences, could we run the risk of alienating one another instead?

One way of testing how open we are to our differences is to see how we celebrate public holidays in Singapore. Most of us would see it as a break from work, but ask yourself: How far do you go to celebrate the different holidays with your friends from other cultures and races?

For non-Chinese, do you visit your Chinese friends’ households during Chinese New Year? Likewise for non-Muslims during Eid? How much do you know about Diwali? Do you think that Christmas is only about gift-giving?

This isn’t to shame anyone for not knowing details about other cultures and races that live in Singapore. The critical question here is this: If given a chance, would you want to learn?

I still depend on friends from other races, cultures and religions to educate me on things I’m not aware of. Sometimes, I Google it myself (fact-checking multiple sources, of course!). There are also free public forums such as The Whitehatters’ AMA (ask me anything) series that bring leaders together from different faiths in a safe space to raise unspoken issues.

Perhaps in this context, having a Racial Harmony Day is just another opportunity to teach our children more than just something that appears on a test paper.

Nevertheless, we should still be careful that such occasions not become another way for casual racism stereotypes to perpetuate — as this wonderfully on-point video from NSFTV illustrates.

A post shared by Not Safe For TV (@nsftv)

We also mustn’t forget that it’s more than just CMIO when it comes to ethnic groups in Singapore.

If we focus just on the four official races in Singapore for Racial Harmony Day, what about the other people from other nations that call Singapore home?

I’ve got a friend from Uzbekistan who has been living in Singapore for years. The other day, a new acquaintance was chatting with us and casually asked her: “So when are you going home?”

She looked a little surprised and replied in English, still tinged with a trace of a charming Russian accent: “Singapore is my home.”

It’s small genuine interactions like this that give me hope.

This, to me, is the ideal, that even if someone is to make a cultural faux pas, we have a safe space to address it. It’s my hope that we will not be too quick to take offence at ignorance, but to see it as a chance to share. Not to glare at a person or to call them out, but to gently correct, with a tinge of humour, and to recount as an amusing anecdote later!

In June last year, Deputy Prime Minister and Minister of Finance Lawrence Wong spoke at a forum on race and racism in Singapore organised by IPS and the S. Rajaratnam School of International Studies.

His speech is well worth reading in full, as it takes a frank look at racism and might be an indication on how Singapore will approach the issue in the future.

In the speech, he said: “Race is never an easy issue for any society in the world, especially highly diverse ones like ours. It is highly emotive because the question of race is wrapped up with our identities, our cultures, our ways of life.”

“The natural instincts of humans are to look out for people who are most like us, and to keep a distance from others… we would be fooling ourselves if we believed that racial and religious harmony were the natural order of things. It does not fall ready-made from the sky. There is nothing preordained about a multi-racial society.”

“Now in a positive way, social media has helped to create greater awareness of racism here. This has made us, especially the majority, look closely in the mirror and reflect deeper about who we are, and who we want to be.”

“And we clearly cannot leave things as they are. We are better than this. Whether online or offline, we must hold ourselves to higher standards, and tackle racism wherever it exists in our society.”

Why not every day? By making it a single day, are we now saying that we are free to indulge our stereotypes on other days?

Our children dress up to go to school. To them, it’s a chance to have a bit of fashion fun and learn about other cultures. I’m glad that in Singapore, we don’t have to worry too much about accusations of cultural appropriation, as some in other countries do.

By making it an occasion, it’s a chance for our children to find out more about their friends’ lives outside the classrooms.

It’s not all just games and dressing up either.

Education Minister Chan Chun Sing shared on his Facebook this morning how students at Kranji Secondary School got to thinking about how they would respond to different scenarios of racial stereotypes and racism during their Character and Citizenship Education lessons.

He said in the post: “Racial harmony has been and remains a work in progress… As our schools commemorate Racial Harmony Day today, let us remember the importance of strengthening racial harmony and deepen our appreciation of diverse cultures.”

Or as PM Lee said in his Facebook post on Racial Harmony Day: “Our racial harmony is not perfect, and we are still learning and growing as a nation. As long as we do not take this peace for granted and work together to protect our common space, we will get there.”

Last Friday (July 15), Liverpool played Crystal Palace in a packed National Stadium. One thing that struck me, after watching Jordan Henderson score the first goal in the 2-0 win, is the celebration of the fans in the stands.

A boy waved his Liverpool scarf in the air jubilantly while an older man cheered next to him.

In the sea of red, no one cared if their neighbour was Chinese, Malay, Indian…

Last Saturday (July 16), during the National Day Parade rehearsals, a naval diver splashed into the water off RSAF’s latest Chinook helicopter, the Singapore flag was proudly flown by and fireworks boomed later in the evening. Performers strutted their stuff and the crowd, after two years of Covid, lapped it up.

In the sea of red, no one cared if their neighbour was Chinese, Malay, Indian…

We forget our differences when we find something greater than ourselves to be united for.

It could be a sports team that you root for. A spectacle that wows you. A cause to fight for. An event to celebrate. It could be the family that you have, the friends that you find. The organisations you join. The people you meet. 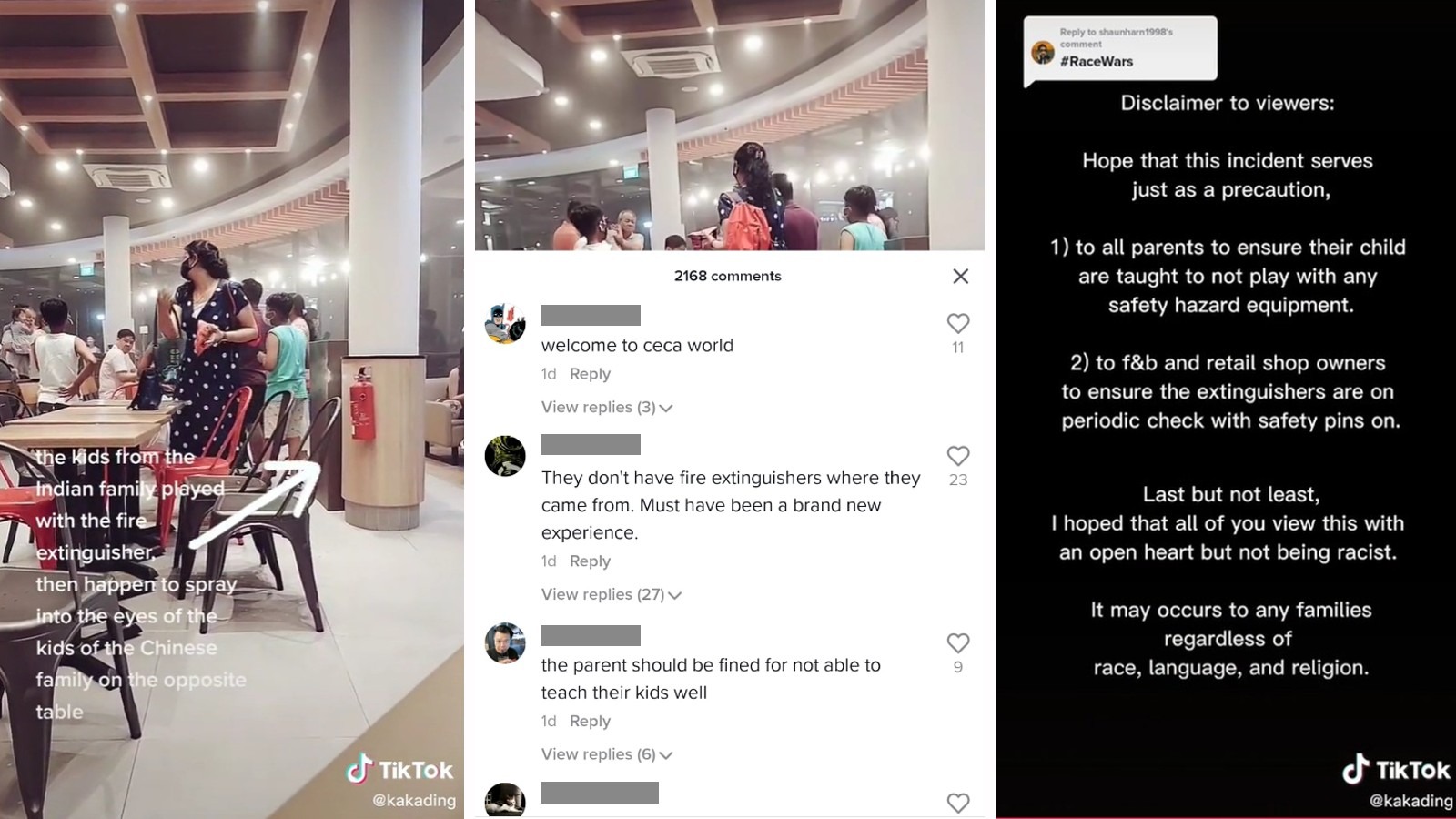 When I was in school, we were taught the melting pot analogy about cultural assimilation. But in our more diverse times, I think it needs a bit of an update.

With Singaporeans’ love affair with dipping food in boiling soup, I’m going to call it the hotpot analogy.

Let’s add the ingredients of our different racial, cultural and religious backgrounds into a simmering broth that is uniquely Singapore.  Each additional ingredient retains its original flavour, while at the same time adding its own character to make the broth even richer.

There are more that unites us than divides us. Acknowledging our differences doesn’t need to come at the expense of our unity, nor should celebrating our unity threaten our uniqueness.

Maybe, in that way, for that reason, there is still a place for Racial Harmony Day in Singapore.

Or is there? What do you think?