Learning the lingo between different generations is key to understanding how we think. Do you know what all these Gen Z terms mean?

Yes, you read it right. That’s a real word. Any Gen Z would immediately know how it sounds like in their head.

Hi, I’m a millennial and I’ve been using Gen Z lingo to fit in better with my friends born after 1995.

To think, just two years ago, I was reluctant to download TikTok as I wasn’t sure if I was able to relate to its content. But as a digital marketer, I had to keep up with trending social media apps. It’s a FOMO life.

I downloaded the app, and it opened my eyes to a different world — no more pictures or angsty posts with a thousand words! Short-form video content for the W!

Looking back, I reckon that’s when I started diving into the Gen Z world. In fact, I have been using so much of their lingo that recently my millennial fam started getting salty about it.

So why so tryhard? It may sound like I’m trying to latch on to a generation I don’t belong to,  but personally, I think that’s just a way of engaging with and understanding them. Iykyk.

I believe that cross-generation interaction is a two-way street — one group has to take the first step before the other reciprocates.

Think of how you would try to strike up a conversation with your grandparents; or how your mum might ask you to explain the jiggle jiggle challenge — it’s all about someone taking the first step.

When I had my first extended interaction with a Gen Z intern, I felt so out of touch! She was using phrases that I never heard before, or worse, misunderstood.

To add to my initial discomfort, I realise that I’m actually a Zillennial (yes, that’s a real word too) So I’m already stuck between two worlds, hearing phrases that I don’t quite understand from those just a few years younger than I am.

Since that first awkward conversation, I decided to step up my game. Now, whenever I meet a zoomer, I always ask them (contrary to popular belief, non-binary pronouns are not a Gen Z invention, but certainly popularised by them) to teach me some Gen Z lingo as an ice breaker.

That way, I get to update my woke vocab and at the same time, get them to warm up to me.

So spontaneous, no cap

There’s another benefit to talking to Gen Zs. Ngl, they are simply fun to be around.

Next time you’re stressed at work, just try starting a casual conversation with them. Once, I did that, and the next moment, I found myself thrifting at a second-hand clothing store during lunch.

That’s how spontaneous they can be at times. Think about it, when was the last time you did something on the spur of the moment with your peers? It hits different.

Gen Zs often find new and interesting ways to live large on a budget, since most of them are still studying or just starting out and have little disposable income.

Recently, I joined a new dance studio. It has been quite a while since I’ve joined a class so I was apprehensive as to whether my classmates would be welcoming.

I was shook when I realised that most of my classmates were Gen Zs. For warm-up, the instructor even played TikTok trending songs — I was lowkey pleased that I could identify the full song, not just the 15-second clips!

During the class, when we had to dance in groups, others would cheer for us. I’m not simping, but it really runs contrary to those negative stereotypes of Gen Zs as entitled or non-resilient.

No doubt, experts have said that there is room for concern for Gen Zs as they face the highest amount of stress compared to other generations. This in turn, has led to the highest rates of depression in our young people. What does a purple talking squid have to do with youth mental wellness? In an interview with TODAY, IMH CEO and veteran child psychiatrist Daniel Fung said that as a society, we have not equipped our children to handle stress well.

“While living density has increased, we also experience a lot of isolation. We may not be physically distanced but we are socially distanced. Of course, the pandemic does not help,” he said.

But that doesn’t mean that all Gen Zs are emo, depressed, withdrawn and stressed out.

Gen Zs can be a joy to be around — once you earn their trust, they aren’t afraid to share stories about themselves, stanning on their crushes with no filter at times.

And since studies have shown that if you feel happier, you will look younger — that’s one of the secret reasons why I like to hang out with Gen Zs!

They are going to be our colleagues

When I first joined the working world, I heard plenty of boomer comments that millennials are too soft, lazy, entitled and lack resilience.

Today, that stereotype is projected onto Gen Zs. Smh.

But are young people really so entitled?

For older employees, the mindset has always been to hustle hard to get job (and therefore personal) satisfaction.

But increasingly, Gen Zs have other motivations. After seeing how older workers experience burnout and economic insecurity despite spending so much time on the job, they now demand more: More pay, more time off, more workplace flexibility and more social and environmental responsibility.

Millennials like me would prefer such elements to our jobs, but for Gen Zs, these preferences have become expectations – and they’re willing to quit if their needs aren’t met.

For example, they inject life into a stale office with meaningful but mood TikTok videos.

In discussions, they are not afraid to share their thoughts, sometimes even pointing out our boomer moments.

At the end of the day, it’s about bridging the generational gap.

In a recent poll by the National Youth Council, half of those surveyed said that intergenerational differences are a problem in Singapore, albeit not as serious as other social issues.

Nevertheless, two in five believe that such intergenerational gaps can affect workplace relationships and would hinder Singapore’s progress as a nation.

The poll also showed that at least one in two non-youths describe the younger generation as “carefree, idealistic and entitled” while at least three in five youths view the older generation as “conservative, stubborn and hardworking”. Bridging that generational gap might not be easy, but it can be simple. Sometimes, a simple action like saying hi could be the start to forming relationships between generations — millennial to Gen Z, or otherwise.

After all, one conversation leads to another, as long as you know the lingo.

With that in mind, perhaps I should teach my grandma some Gen Z phrases tonight.

Fr, having different generations vibing with each other would slap, ngl. 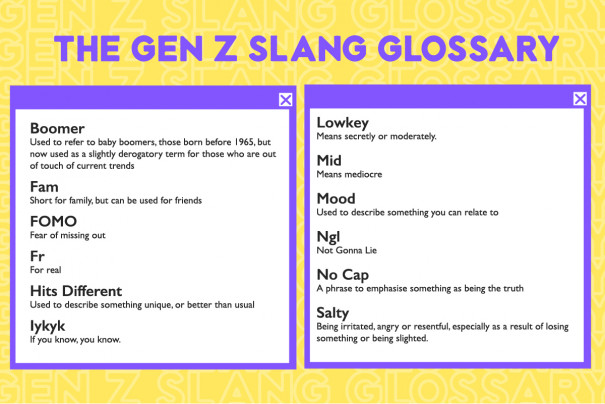